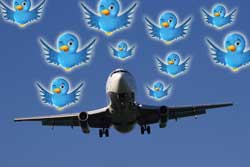 Admittedly, other than blogs, I am not a huge fan of the social networking phenomenon: Twitter, Facebook, Digg, MySpace, blah blah blah. BUT, most other people are. Now, some are taking it to the next level and taking their gripes beyond a frustrated email or call to customer service and rather, tweeting them real-time to countless others.

A story on MSNBC.com “Frustrated tweets new headache for airlines: Fuming passengers can vent about delays, strandings, service in real time” pretty much says it all. Seems people are letting out their frustrations about delays and cancellations and typical airline shenanigans in real-time… even right from the very plane! This is causing the airlines another public relations fiasco and some even acknowledge they are monitoring such social networking sites for comments about their airlines. One that is hard to battle.

“Screw american airlines. Every plane has Been broken. Gah. So done”

“Shame on you Continental Airlines”

“United airlines, you are the bane of my existence” (personally, I love this one the best)