The Threat of Fines Gets Things Done! 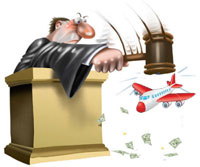 Reported recently that that airlines “virtually wiped out three-hour tarmac delays in April before huge fines for holding passengers on the runway went into effect.”

According to MSNBC, “The 18 airlines that report statistics to the Transportation Department were on-time 85.3 percent of the time in April, compared with a rate of 79.1 percent a year earlier and 80 percent in March. Most delays were caused by late-arriving aircraft and aviation system delays, which include bad weather, heavy traffic, or airport and air traffic system slowdowns.” U.S. Airways posted the best on-time rate while American Airlines reported the worst on-time rate of big U.S. carriers.

Since delays from airports in NYC are know to cause ripple effect across the nation, it was reported that “the on-time rate for New York’s LaGuardia airport rose to 84.2 percent from 67.4 percent the month before. At JFK, the on-time rate improved to 83.5 percent from 67.3 percent the month before, despite the airport’s longest runway being shutdown for repairs.” Wow, some of these are pretty significant jumps.