The Writing Is On The Wall.. I am About To Get Skrewed by American Airlines 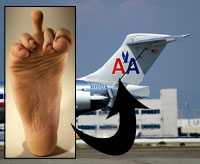 Okay.. here we go… I bought a ticket in July and based my purchase on who allowed the best rate to carry a bike to Rome. I could have selected anyone from United to Delta to AA, etc. I selected American Airlines after a talk with a reservations specialist. I was explicitly told, on July 14th, the fee to take a bike to Rome with AA was $110 & I was locked in even if fees changed. On their website, and I was told to visit and confirm on the site, it listed $100 and the agent said, “well it is $110 for international”. I said fine and would not quibble over $10. She told me to print it out and take note, I did.

Today I called to check gate location info given I have a tight connection and decided, on a whim, to confirm the bike fee.. I got a real shocker.. but I guess I should not be as they now say $150! A 50% increase! The agent then tells me that the fees changed in August and I told her no worries, I bought my ticket before the August change so I am covered so I was told, no? Silly me… she says, ‘none of our fees are tied to when you buy your ticket’, despite the very fact that on their official baggage page, at the very top, it clearly references when/how ticket purchase dates do in fact determine fees. A total contradiction from what she was telling me. I mean, when a person visits the site and checks bag fees on the official “bag allowance” page they tell us to so we can be prepared, we expect that charge. Even more so when a previous CS person confirms the rate. The current CS person claims, but could not find, nor can a Google search or an AA.com search find, a page for ‘international baggage fees’ that would clearly show me the rate is $150 to Italy now & not dependent on when I bought my ticket. I find nothing and they can point me to nothing – but it exists, “she just does not know the internet site that well” and I am suppose to take her word for it. Okay, so now I am being told to not refer to the baggage fee page – the official page with international references- as there is another that lists it at $150, but they cannot find it? What a joke.

So, I think I am about to get jammed by these guys. My only options are to (1) pay 50% more than I was told despite my ticketing date and the first call to CS or (2) put up a big old battle at the gate upon arrival, a battle I will not doubt loose. To say this type of treatment and contradiction is infuriating – because we have no source for remedy – is an absolute understatement. It is getting to be where you expect trouble when traveling & this sets the negative tone for that first part of your trip as you get to sit and stew about it.

With airlines anymore, you are between a rock and a hard place. No way to turn, no guarantees, no advocate. Pay higher rates, extra fees, receive less services, virtually no CS and still have no guarantee what you do pay for you will be even be provided.. maybe you will be on time and maybe not. Maybe your bike will make it – despite a massive fee – and maybe not. Maybe you will make your connections and maybe not… and if the answer is “not”, they still got your money, did not provide what you agreed on despite you paying and keeping up your end of the agreement. What other industry can take your money and not guarantee the services you paid for…. I would continue my rant, but my head is about to explode and I am getting off topic…

Seems I am not the only one (read this).

UPDATE: Oh yeah.. I got skrewed… they lost my bike on the return leg. Still looking for it at this stage. Was in NYC when I last turned it over to check in after passing through International customs. We were so late (all 4 of my flights – 2 out and 2 back – were late) I had to hustle to get it to the gate to recheck in after customs. I was first in line…. and my bike still did not make it. I even said to my chick, “I have a bad feeling about this” given they were sooo slow checking people in and it was such a mess that when we did get to the gate (after 2 security check points, running 3 floors and taking a bus to the new gate) that I asked the supervisor – Ebony – to please call and make sure the bike did not just sit there on the side of the baggage area where they asked me to leave it. She said it had been taken care of and it was on the plane! So, where was it then? I had watched on the plane and in the airport as American employees checked voice mails and text messages, chatted it up with coworkers, sat around… but lost my bike as they simply had no time for that.