Ode to the NYC Marathon… I wish I was There.. Kind Of 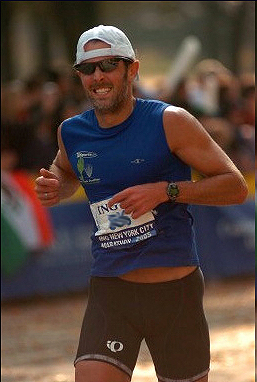 It is that time of year… I can smell it and feel it with fall upon us. It is NYC Marathon time. Despite the fact that marathon is not my forte and not what I am really known for, 2005, 2006, 2007 saw me race the NYC Marathon. (Only because I happened to run times fast enough to qualify and not sit through the lottery.) I truly love the experience and event itself as it is huge, well run and just a real spectacle that is the best spectator race I have ever raced. But, it is a hateful, tough course I find. So much so, I vowed, after my 2007 performance, to never race it again. I have raced all kinds of races all over the world with all caliber of athletes, and NYC continues to be one of the toughest for me despite great preparation, base, conditioning, and years of racing experience. I just cannot get that race figured out and it takes to much out of me – just ask Lance, he had similar sentiments. Don’t get me wrong, I have always finished very well.. in the top 400-1000 of about 40k people over those 3 years, but never to my true potential (or, at least results in other races & those calculators claim my potential should be).

Despite my 2007 vow to never race it again, I find myself reminiscing this year. Longing for the end of the season, fall blow out race that beats me up, spits me out, and allows me to end another race season toasted and depleted. I am feeling this so much so, I have already started to mentally commit to doing it in 2009. Already started thinking of where and how I will qualify. Already started thinking of ways to improve over the last few years. Not doing it has left me feeling antsy this year as a few high profile races in Italy ended my season in early October, about a month earlier than normal.

So anyway.. I envy those of you racing in NYC this year and God (and body) willing, I will be there in 2009 if I can drag myself through yet another year of racing. I’ll be watching it on the web Sunday.