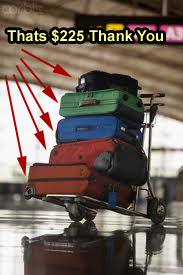 According to a CNN story, it has been reported that, “Airlines have raked in more than $2.5 billion so far this year on baggage fees alone” with Delta Air Lines ($733 million), American Airlines and US Airways pulling in the most revenue.

The other big fee that raised the airlines a significant amount of money were those from ticket cancellation and change fees that equaled about $1.7 billion in three quarters this year.

But, the most important 2 comments from the article were, “Some of the change fees are, frankly, thuggish” and a quote that stated “People are paying it, people aren’t revolting, and so they’ll be there forever” – isn’t that the truth. Once they opened that door and people did not fight back immediately, it was here to stay. As well, it set the trend for all the airlines to jump on board and test the waters with other types of fees such as carry on luggage fees, seat selection fees, food fees, etc. At times, it makes you wonder exactly what your buying when you purchase a ticket since a ticket does not cover your bags, meals, and in some cases, carry-on luggage or even having a preassigned seat. What’s next? Seat belt fees, oxygen fees, bathroom usage fees, in-flight entertainment fees, magazine & newspaper usage fees?