"Tubby Tax" not such a bad idea, I have to pay for my bike afterall. 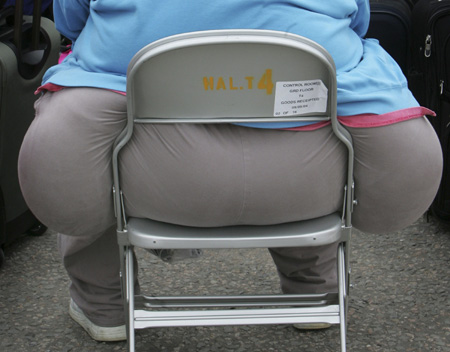 It has been long known by active travelers that when you chose to travel with a bike, surfboard, golf clubs, etc. you get charged for the odd size luggage AND even additional weight. For example, a bike costs about $100 due to the ‘over sized’ luggage policies of many airlines. And, if the bike case weights more than 50 pounds, you can expect an average of about $50 extra for the ‘excess weight’ fee on top of the oversized fee. So, a new idea being batted around does not seem so outrageous. As a matter of fact, it seems down right fair.

The idea, surprisingly proposed by health experts and not the airlines, is having obese travelers pay extra fees due to their weight. Why not? The plan is simply to have obese travelers pay for each kilo they weigh above a set limit, in the same way as excess baggage has to be paid for. The ever increasing waistlines mean airlines are being forced to revise their projected passenger loads to calculate extra fuel needs. And that costs money we all are paying, despite me weighing a svelte 150 pounds and fitting easily into 1 seat assigned to me.

I get it when I travel with a bike, so why not for those carrying around an excessive amount of extra pounds. Sure, you could try to make it into a moral or discrimination issue, but the reality is, I am ‘discriminated’ against for carrying on a bike case and pay the price. And a traveller who attempts to carry on 5 bags or a 75 pound bag is also “discriminated” against and asked to pay extra fees. So really, what is the difference? Because it is in the cabin, and on a human in the form of skin it should matter?

Dr. John Tickell, an expert in nutrition and weight control who heads the Australian team making the proposal, says it clearly and concisely when he states:

“Airlines are buying fuel and if you are carrying a heavy weight on a plane it is you who should be paying for it. But instead, the rest of the public is paying for it and it has to be stopped.”

We think this is a legitimate idea that needs further study and consideration. It may even have the positive side affect of helping spur some obese people into finally addressing their obese condition.