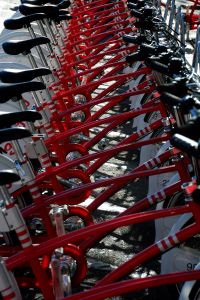 A city with bike sharing services! Cool. Bicing, Barcelona had made it happen, on a big scale. And now… it is heading to the good old USA in 2008; Washington, D.C. to be exact.

Again, not totally in the vein of the stories we comment on, but close enough to peek our interest. Although the Barcelona model is not the first to do this, they have certainly refined it. The advent of GPS, RFID tags (radio-frequency identification) and automated payment kiosks have made systems more secure and user-friendly. However, I can recall, for many years when I would go train and race in Boulder Colorado each summer, picking up one of those beat down rickety spray painted green bikes seen near the college area, cruising around to my destinations, and then leaving it for someone else. Then doing it again the next day. As a matter of fact, on more than 1 occasion I also fixed some of these bikes – I have mad bike mechanic skills – as I felt one good turn deserved another and it was my way to give back. At the time, I remember thinking just how progressive that plan was and how often I used it and saw others use it, and wondered why it it was not in use in a more organized fashion.

Well, according to an MSNBC story, the Bicing, Barcelona bike sharing model, launched in 2007 and boasting 400 stations with 6,000 bicycles to rent, is coming to Washington, D.C. this May. And yes, you rent them. But, the upside catch is it is a self service system (no store front, no one to check in with) and you can return them to any station you choose and keep them, short term, as long as you need (i.e., no hour, 2 hour, half day limit), though research is showing the vast majority of users spend less than 30 minutes with their bikes. No need to take it back, like a movie rental, to the exact station you got it from. Payment, made by a kiosk or subscription fee, are an annual membership or a sliding scale based on the amount of time the bike is being used, or a combination of the two.

The Washington, D.C. launch – reportedly started and maintained by SmartBike DC – will initially offer annual subscribers access to 100 bikes at 10 stations in the city’s central business district. Other cities, including San Francisco and Chicago, are eager to follow suit the story reported, while European cities like the Paris operation, Vélib’, tout more than 20,000 bikes being available at over 1,400 stations, spaced 250 to 300 feet apart!