Southwest is feeling the squeeze, adds an ‘optional’ fee 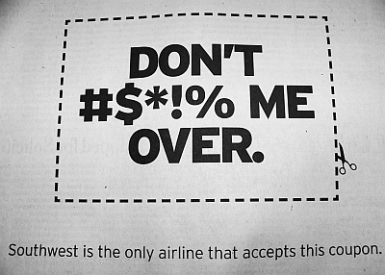 The low fair airline known for cheap flights, minimal amenities, no extra bag fees, and an A, B, C ranked boarding method based on when you checked in for the flight, has instituted a new optional fee as of today. With the “EarlyBird Check-in program”, for a mere $10, it assures customers an early shot at grabbing a primo seat AFTER Business Select and elite-level frequent fliers get their pick. So that means, you can jump ahead of the regular line and families with young children. IS it worth $10… not to me, but maybe to others.

The bigger issue here is that a no fee advertising airline – one that prided itself enough on it to market it as such – is now adding a fee. Yes, it is optional, but by one of the executives comments, it may not be the last, “Everything is on the table” (relative to fees). But, many customers at our local airport that were interviewed for the story had the same theme in their comments.. their tired of fees, think it is a bad move, will not use it, and think it hurts a company like Southwest as it starts to eats into their simple process and starts to muddy the waters.

As 1 poster on a local site said, “I haven’t been able to find a “better” seat on Southwest on any of their flights!”