If You Can’t Workout at the Airport.. Why Not Surf? 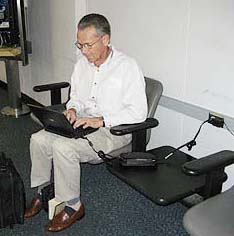 In leu of having access to an airport gym or fitness center near your airport, it might be nice to know just which US airports are ‘most’ hip to the Internet craze and offer internet access for those that – rather than watching the TV or sitting on ones rump watching odd airport people – would rather get some online time in.

Of course, the point of this blog is to spread the word about where to find gyms in and around airports. But in the absence of a gym or fitness center, and the fact the story is some what relative and industry related, what is one to do if there just is not an option to workout? Well, we know we could walk the terminals, sit in a bar, watch the tv, do some push ups, calve raises and sit ups… but better yet, why not surf the web and answer some eMails, check the weather, buy some goodies, or get some work done?

Well, according to a recent story by MSNBC, here is a list of the 9 most wired US airports. (They originally had 30, which consisted of US and International options, but we scaled it back to just US options here.) Their criteria was as follows, they rated “the breadth of Wi-Fi coverage, whether they charged for the service and how much, and how many providers they offered as options. Finally, we looked at the comfort and convenience factor. That included checking out whether the airport offered workstations, adequate seating and electrical outlets, as well as facilities like computer rooms and business centers for travelers looking to get online without their own laptops.”

*NOTE: those with an asterisk also have an airport gym listing at AirportGyms.com in case you would rather workout than surf the web.