We Don’t Want To Say We Told You So… BUT WE TOLD YOU SO! 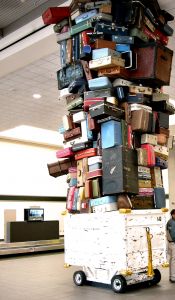 Sure enough.. if you read down in our post about United starting to charge for a second checked bag, we mention that that move would just open the flood gates. As a matter of fact, we said, “…which we all know means the others will follow suit now that the door has been opened.” Well, sure enough it was announced today that Northwest would follow suit starting.. May 5th. Wow, just so happens to be the same day United set for their start date for this new wrinkle in travel bogusness. The charge will be.. drum-roll please.. $25. Wow, just so happens to be the same amount United announced.

According to Northwest, and United and everyone else (rumors of US Airways as well) that will follow suit as now that one opened the door and the other slipped their foot in at the same time, the $25 charge applies to each-way on two-way USA trips.

Also similar to United, they have their caveats for their coveted high-end frequent fliers and the dubious ‘full-fare’ passengers in that they can still check two bags without paying extra fee while First-class passengers get three bags for free. Additionally, it is also going to start charging 100% more than it did for bags over 50 pounds as the old fee was $25.