Amazing.. Airlines Have the Audacity To Complain About A Fee? 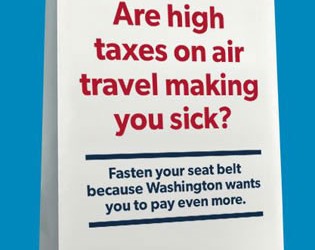 A barf bag being handed out at Reagan National Airport near Washington that had the following on it, “Are high taxes on air travel making you sick? Fasten your seat belt because Washington wants you to pay more”, is a prime example of the pot calling the kettle black. Essentially, the airlines have zero problems taxing and feeing you to death on everything from increased gas prices they pass on to us, to where you sit, to how many bags you bring and even to once free in cabin meals, but they apparently have a serious problem with a fee proposed by someone else on them? A stunning bit of, albeit not unexpected, hypocrisy.

The story on Bloomberg goes on to say, and are you ready for this, “The goal is to persuade members of Congress – especially Republicans – that the 9/11 fee is merely a tax by another name and that a scramble for new revenue should not hit air travelers.” Uh yeah, as if the airline industry ever had a problem scrambling for more revenue no matter how hard it hit air travelers.

The $2.50 fee to which is used to fund the TSA could double to $5, or roughly $20 total for a round trip. As the story keenly points out, the airlines are not in any way worried about the traveler, though they disingenuously act like it, but they are worried because every tax on them diminishes their ability to raise fares and add fees on the traveler and they argue that every $1 increase in ticket price reduces demand by as much as 2 percent. Again, they don’t mind a tax or fee imposed on you.