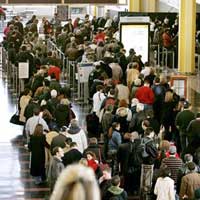 A Reuters story reported today, “…screening the bags carried onto a plane instead of being checked costs an extra $260 million.” So what, the airlines are not helping foot that bill? Stupid me for assuming so. Forcing people to pay for checked luggage naturally leads to us all packing lighter to be able to carry on our luggage (I recently got my backpack down to carry on size and 23 pounds for 30 days in Thailand). So would it not seem logical that the airlines would help foot the bill for the extra work the TSA – who screens about 2 million passengers a day – has to go through to screen all these extra bags being carried on and slowing things up? Ha – what were we thinking? The greedy airlines just passed that related cost on to the government, which is us. A nice double dip for the end user if you think about it.

It was further reported that the U.S. Travel Association, comprised of the hotel, car rental and amusement park industries, was pushing the Obama administration to try to step in and force airlines to allow all travelers to freely check 1 bag as part of the base fare paid – hmm, that rings a bell – as a way to cut down on this cost and in turn, the time it takes for us to get through security as all of these extra carry on bags get scanned. Seems reasonable, but we all know that the airlines will not give up that gouge of a checked bag fee without a serious fight. Heck, it made the top airlines nearly $906 MILLION this past year, and is set to increase.

2 other considerations being tossed around:

– allow passengers arriving from international flights and who are considered to be a low risk, be allowed to connect to domestic flights without going through screening again. This PITA dog-and-pony-show has negatively affected me more than once

– create a Trusted Traveller program for those of us who are considered to be a low risk and can prove it. Thereby allowing a faster moving security line.