I have had the great fortune to have run (and/or cycled) all over the world: Japan, Italy, Denmark, Hungary, Australia, Switzerland, Canada, Mexico & every country in Central America.. and now I can add Thailand to the list. And let me tell you, it was interesting, often required strategy sessions with a map, and was filled with memories I’ll have for life.

From the early morning big city polluted streets of Bangkok, to the jungle stream paths in Pai, and from the open flat country roads in Kanchananburi to the hilly ascent of Doi Setup in Chiang Mai and flat serene beaches of Ko Lanta. Each one was memorable for it’s own reason.

There is nothing more surreal (and stressful in terms of running) then to be up at 5am and running through the dark, dirty and sketchy streets of Bangkok. Locals out and about at that time are shocked to see a lone white man – with a surgical mask on in running attire with flashy red shoes – running through the crowded and polluted streets and alleys and doing so at a pace that eclipses anything they are use to seeing. I’m sure I can say it is as memorable to me as it was odd to them. Very bizarre at moments, but a terrific memory nonetheless.

In Pai, in a small town up in the north, I had the opportunity to make a rare run up a jungle path – think of Rambo style with over grown tress and palms and damp and wet lush green with odd bird and animal noises – to a series of waterfalls. I say rare in that I highly doubt many people run this path, let alone walk it and make it that far from what I was later told. I must have crossed the stream – waste high at points – 30 times.. 1 way. It almost got to the point where running up the stream was easier than trying to stay on the trail that criss-crossed it. Talk about a stark contrast to Bangkok.

Kanchananburi was much like open country roads out amongst the fields of rice and vegetables. Flat and fast BUT with a big twist… getting chased by packs of “street dogs”. I have never in my life seen more dogs living homeless on the streets than in Thailand. It is nothing more than shocking. Hundreds a day and at times, I had to get in barking and stare down matches with more than 1 while out on a run. More so in this town than any other. I love dogs, love them, and it was very sad at times.. but I just ran on through like I owned the place to try to show them who was the alpha male. I guess it worked, as I ran past and returned the growls they gave me they would generally turn tail and run. 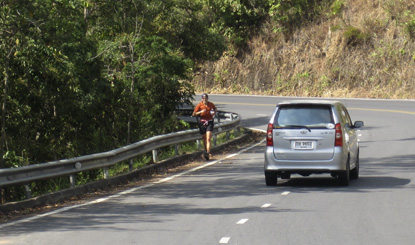 I was able to make 1 real big hill/mountain ascent while in Thailand and that was up the mountain that lead to the Doi Setup Temple in Chiang Mai. I am not sure how long it is.. many, many miles and takes hours to run and it is a pure ascent from the start all on a road full of twist, blind turns, and switchbacks. This was another run that got me lots of honks, grins and blank stares that said, without saying, “what is this guy thinking”. But I made it and it is another for the books.

Way down south, in the popular beach areas of Thailand, we picked a lesser traveled island beach called Ko Lanta. Every day we were there I would make an assault on the flat beach up to one end and back along an area called Long Beach. This assault would take me about 1:02:00 on an easy day and about 54:00 when going for speed on my fastest day. It was serene & peaceful to say the least, right out of a postcard. Every run would end with me diving into and swimming in the 70 degree, flat and waveless ocean to cool off. Ahhhh….

There were lots of miscellaneous runs in between these: doing tempo speed work around the mote of the inner city of Chiang Mai, long runs along the beautiful elephant farms in Pai, running across – at sunset – the famous Bridge over the River Kwai, doing 10 x 350 step repeats up to the Mae Yen temple which were sandwiched by ominous scaled serpent railings. Over the years, I have always been thankful and amazed again and again at where a simple pair of running shoes has been able to take me. 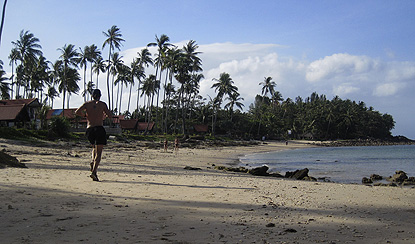 BTW, running shoe selection for a month in Thailand where your carrying a backpack almost daily was critical. Though I am a Nike fan through and through, I got a great deal on a shoe that turned out to be one of the best decisions I could have made. I picked up a pair of Zoot Ultra Race 3.0 racing flats that were super light (+-7oz), could pack real small since they were 100% mesh and neoprene so no bulk, required no sock, had a speed lace system, had drain holes for water and the mesh allowed for quicker drying as well so I never had to pack them away wet. My first pair of Zoots, they were the perfect choice. 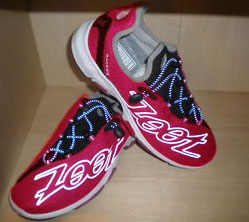